They finally hit a ball

I've been a Cincinatti Reds fan as long as I liked baseball. I think my Grandfather helped influence that. I've wanted Reds tickets ever since the 1990 World Series.

Our homeschool co-op got free tickets from the Reds for Friday, and I paid $30 in the silent auction for all 4 of those tickets. I thought it was a bargin.

Well, they weren't bad. For being way back in the far right corner, on the lower part of the upper deck.

Fortunately, we all REALLY like the Great American Ball Park. Even in the far corner of right field, the field was very watchable.

The game was a different story. The Reds couldn't get a hit, and they stranded 2 on base. Poor Coffey turned a 1 run deficit into a 3 run gap, and that sunk the Reds. The reliever isn't supposed to help the opponents so much.

A couple in our Sunday School class saw Saturday's game, and Arizona shut the reds down again. Terribly embarrasing.

At least the Reds won today, by the skin of their teeth (a 2 run homer in the bottom of the ninth). I told Number 1 Son that that's why you watch baseball: it's not over until the third out.

Posted by Anonymous at 12:28 AM No comments:

This is Number 1 Son, if I ever let him play for money with me: 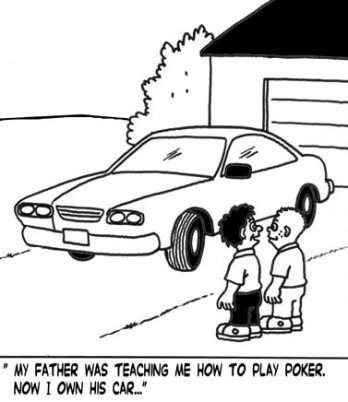 No. 1 Son thinks he's a really good Poker player. The only problem is, he is pretty good. Good enough to where we can't consistently beat the other.

That's why I told him that we can play free tournaments, and games that don't involve paying out money.

Last year, I played this tournament, and he "advised me" (until he got bored and walked off ;) ). So we're going to try it again.

I have registered to play in the PokerStars World Blogger Championship of Online Poker!

This Online Poker Tournament is a No Limit Texas Holdem event exclusive to Bloggers.

Posted by Anonymous at 7:28 AM No comments:

Last night about 8PM, I ate some salsa with our neighbor, who'd come over to talk to Milady. Around 9, the salsa got its revenge: I got a migraine. A "spray the whole bathroom with vomit" migraine. This morning, I felt like someone had picked up my brain, used the inside of my head for hammer practice, and thrown the brain back in sideways.

What's worse, I may be getting day 2 of it. If anyone's still reading, I'd appreciate a quick prayer of healing.

(update 5/26: It looks like it's not getting worse, so I think it's just aftershocks, not a full-blown continuation of the attack. One can hope.)

Posted by Anonymous at 4:54 PM No comments:

Back from the cold

I think I've managed to lose all my readership but Jeff, but if you've stuck around to check on me, I really appreciate it.

Milady's niece had her bilateral mascetomy, and came through it with flying colors. They had gotten all of the first tumor with the core biopsy, but then found a tumor that had been starting up in the other breast during the post-mascetomy biopsy.

Unfortunately, her genetic test results were completely inconclusive. They didn't find any BRCA1 or BRCA2 mutations. That doesn't mean there weren't any, or that there aren't any other mutations. Milady's geneticist says that the niece's cancer is genetic, and that Milady has a 25 to 50% chance of having it.

Milady's geneticist completely supports a preventative mascetomy and removal of the overies. She also doesn't think it'll be a problem getting the other doctors to set it up.

As the quote from Mother Theresa supposedly goes, "I know God will not give me anything I can't handle. I just wish that He didn't trust me so much."

We are praying to God that He leads us. We think right now that He's provided this information so that Milady can get the surgery done now, ahead of any cancer.

We would really appreciate all the prayers you can give.

Posted by Anonymous at 5:32 AM No comments:

Genetic Tendancies -- and needs for prayer

I'm sorry for not posting, but things have been hectic.

Milady's niece has breast cancer. It is Stage 1, and highly differentiated, so her doctors believe that it hasn't hit her lymph nodes yet, and that she can avoid chemotherapy. (The one doctor who did the core biopsy thinks he got the entire tumor when he did the biopsy, but of course couldn't promise it.)

Milady is consulting with a geneticist at the University of Kentucky, and the geneticist is certain that Milady's family is carrying one or more genetic markers for breast cancer. The geneticist is going to test Milady and her niece both, to identify which marker is in play, and whether Milady is now carrying the gene herself.

Our current prayer is that Milady's niece has an easily identified marker, and that Milady doesn't carry it. That means Milady's chances of breast cancer fall back to the same as the general population.

If Milady has the marker too, then plan B is a bilateral masectomy and Tamoxifen for a year or two until she is ready to do a full hysterectomy. She is prepared for that, too.

The worry starts if they can't identify a gene marker in Milady's niece or Milady. Then Milady has to consider having the masectomy and hysterectomy anyway, since the geneticists are 60-80% certain that this cancer is genetic. She just doesn't get that certainty of knowing she HAD to have the surgeries.

Milady's niece has been scheduled for surgery on Friday for a bilateral masectomy, so please pray for her and her doctors. Also, pray that Milady is not carrying the gene markers, and for the geneticists, that they will get an accurate diagnosis.

Posted by Anonymous at 12:39 PM No comments:

A Packrat's View On Life

I answer to Email at kypackrat@kypackrat.com